Error when trying to change the database name

I get this error when trying to change a database name on a new dev with no entries: 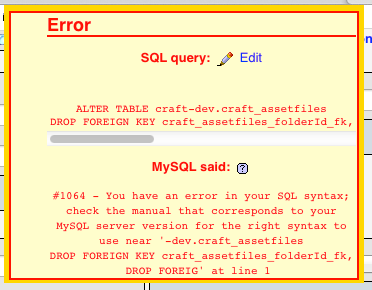 What can be done?

Craft has a lot of foreign keys between tables, so something might be getting tripped up there. Here's what I'd suggest...

Instead of using phpMyAdmin to "Rename database to", perhaps try this:

Assuming that all goes smoothly, you can then go back and drop your original database.

MySQL doesn't have a native command for "Rename database" (well, they did at one point, but removed it shortly thereafter), so any MySQL client that offers that functionality ends up writing their own implementation for it.

That is usually somethings as simple as:

But it looks like phpMyAdmin is trying to be more clever than that and failing. I would try Lindsey's suggestion as a workaround.

Looking at the error, it looks like you've got a dash (-) in your database table name prefix. That's considered a "special" character by MySQL and must be escaped in backticks `table-prefix.table-name`, which phpMyAdmin doesn't appear to be doing, so it's likely there is a phpMyAdmin bug there, too.

Not the answer you're looking for? Browse other questions tagged database or ask your own question.

9
Installation Error "1046 No database selected"
2
Can I change TEXT to MEDIUMTEXT/LONGTEXT in database?
2
"Internal Server Error - Cannot find the target folder." When trying to edit an article
2
Laravel Homestead & Craft: Craft can’t connect to the database with the credentials in craft/config/db.php
1
Getting database error when calling CateogoryService method
1
Importing a Craft database error
1
Restoring a database results in error
1
MySQL error when sync database using Craft Script from Craft Nitro