MySQL server has gone away / max_allowed_packet

After adding a second block type to an existing matrix field, we started receiving a "General error: 2006 MySQL server has gone away" error when additional content was saved to the new block type (screenshot attached). This error was shown in the CP and on the front-end. I was also unable to export the database via Sequel Pro.

This error only occurred on production- for some reason development and staging were fine.

I have since fixed production by restoring an earlier version of the database. We're now able to add content to the new matrix block type.

In trying to figure out what caused this error, I came upon the max_allowed packet setting.

According to this SO post, SHOW VARIABLES LIKE 'max_allowed_packet' tells me that the server value is 64mb.

So I have two questions. 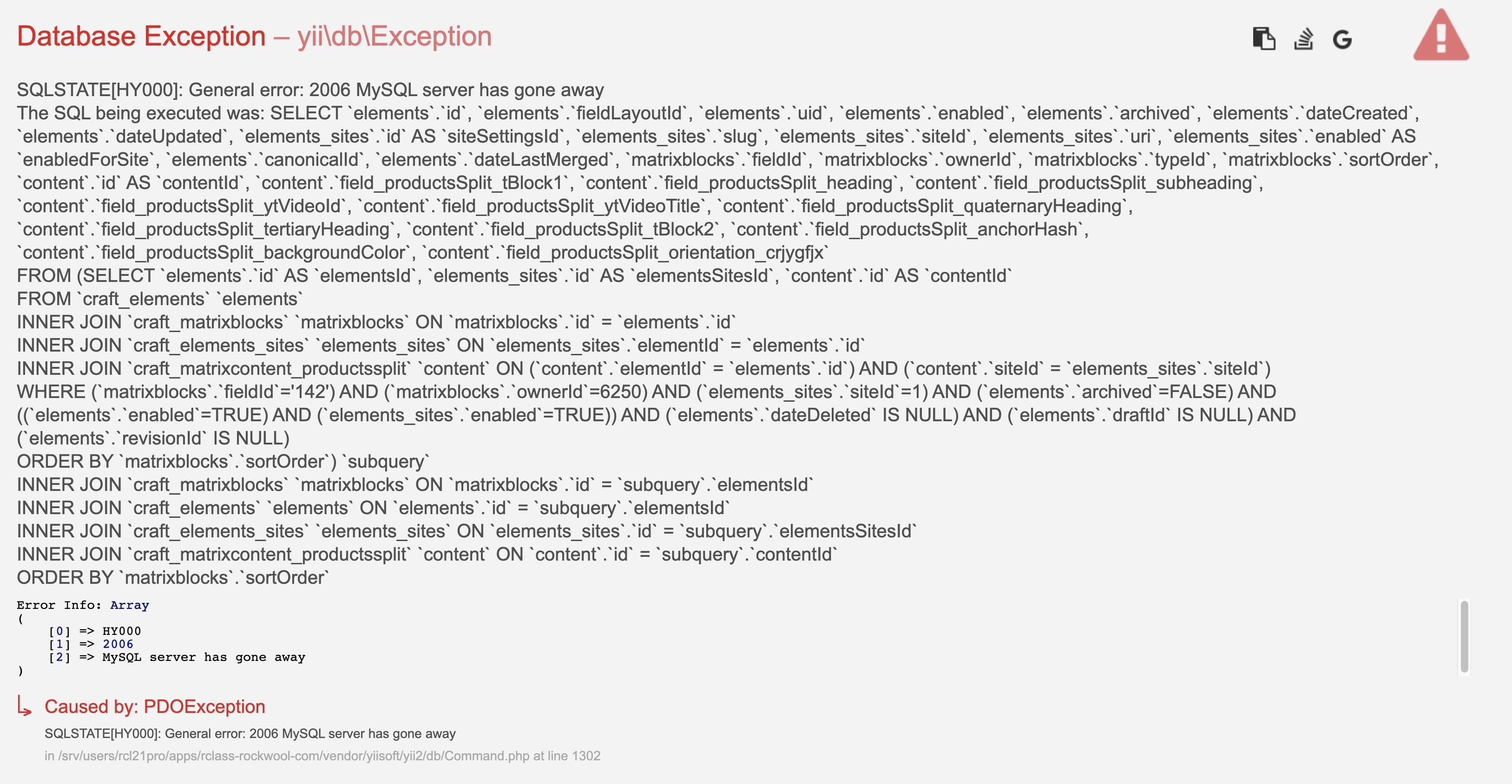 max_allowed_packet isn't the only thing that can cause a "MySQL server has gone away" error.

wait_timeout is another common one but, unfortunately, it's a generic error that MySQL throws for many things.

The MySQL docs have a whole page dedicated to those things worth checking out: https://dev.mysql.com/doc/refman/8.0/en/gone-away.html

Not the answer you're looking for? Browse other questions tagged craft3 mysql or ask your own question.

0
Bumping into max row size of 65k craft_content table in MySQL 5.5
1
Publishing entry returns Internal Server Error (1030 Got error 139)
1
MySql 5.7 error - field doesn't have a default value
2
Error on import to Craft production db
1
What could the possible causes be for a mismatch between `craft_fields` and `craft_fieldlayoutfields` MySQL tables?
1
MySQL "Access denied for user" after moving to new server
1
Using {% cache %} tags around {% template %} includes (or in Header)
1
MySQL 5.6 backup to MySQL 5.7... what to do
3
Running Craft CMS 2 on MySQL 8.0+ (Any major considerations?)
1
Craft Script: Environment variable GLOBAL_DB_DRIVER was neither 'mysql' nor 'pgsql'