Anyone succeeded in upgrading from Craft 3 to Craft 4 ?

Before staging the changes on our dev server, I tried it locally without success. Although it seems pretty strait forward, I updated all plugins (2 of them are not compatible, so I took them off for now as we're not using it yet on dev - reCaptcha and Kint), took care of all deprecation warnings, did the project-config/rebuild and change craftcms/cms to ^4.0.0 and obviously move to PHP 8. Here's a sampler of my installation.

Next step would be composer update, but can't pass this step with success. See other picture of all conflicts... As usual, your input would be greatly appreciated ! 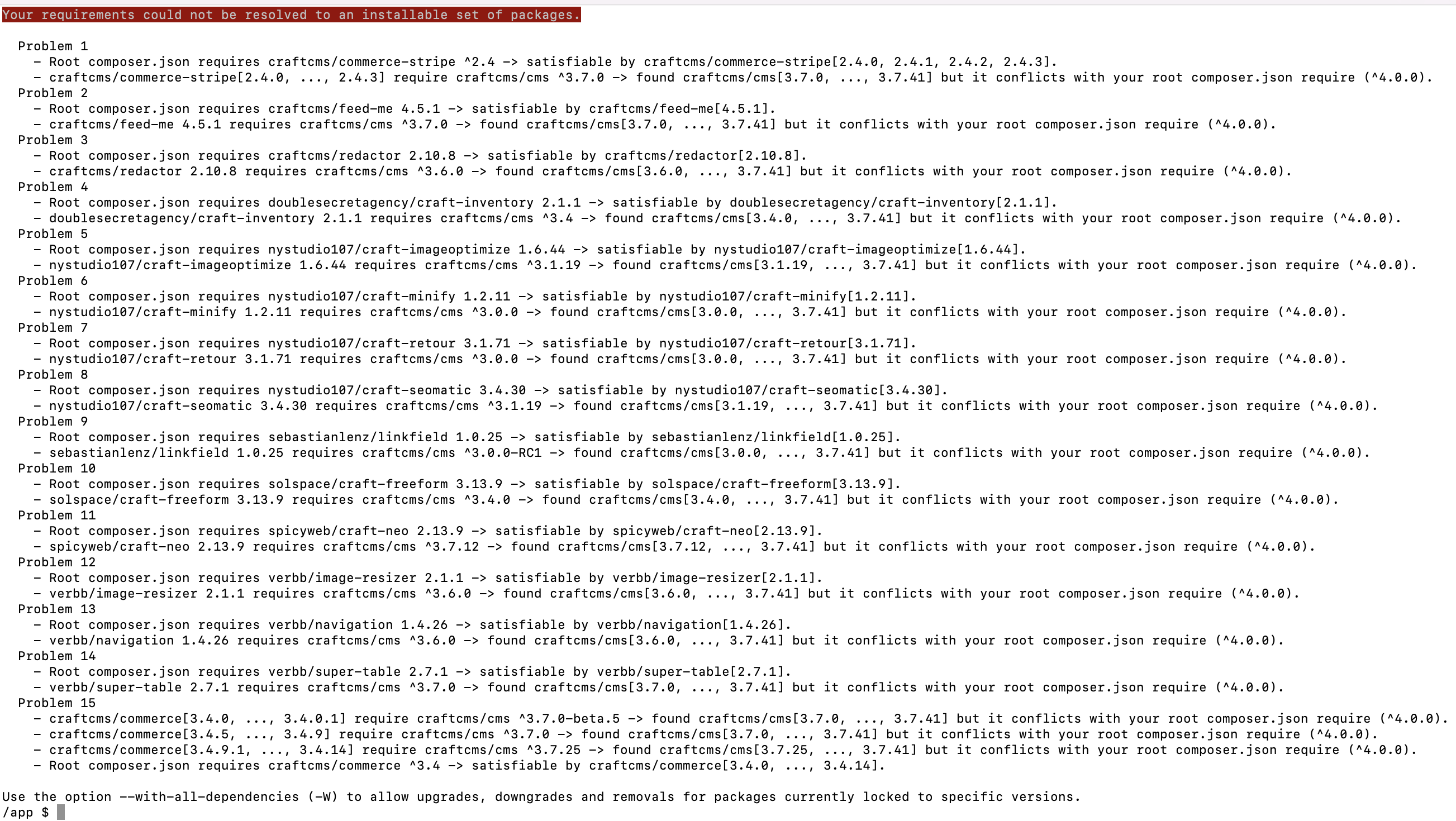 migration craft4
Share
Improve this question
asked May 10 at 17:31

To upgrade to Craft 4, you'll need to make sure that Composer is allowed to upgrade all of your plugins to their Craft 4 compatible releases as well. This is done by manually editing your installed plugins' version constraints in your composer.json file.

The reason why this is necessary is that most plugins are bumping their major version for the Craft 4 compatible release – for example, Feed Me is going from version 4.x to 5.x for the Craft 4 compatible release – and in most cases, Composer isn't able to upgrade an installed package to a new major version automatically. This is due to version constraints in the composer.json file, and in general this is a good thing – major version upgrades often include breaking changes, and those constraints prevent Composer from accidentally upgrading to a version that could break your application.

As an example: in order to allow Composer to update Feed Me to the Craft 4 compatible version, you'll need to change the craftcms/feed-me package's version constraint from this:

You'll need to step through each of your installed plugins to find the version you need to add to your composer.json file. The easiest way to do that is probably visiting the new "Craft 4 Upgrade" utility, which is found under Utilities -> Craft 4 Upgrade inside the Control Panel. This utility is available in Craft 3.7.39 or later, and lists all the latest, compatible versions for any and all plugins installed.

Note that some plugins may still be in beta for their Craft 4 compatible release. If so, make sure to add the -beta part to the version constraint for that plugin as well, i.e. so it looks like this:

After making sure that all plugins have a Craft 4-compatible version constraint declared in your composer.json file, run composer update.

If that didn't work and you're still getting Composer errors – and some of your plugins' versions are in fact beta releases – try adding the following rules to your composer.json file:

Not the answer you're looking for? Browse other questions tagged migration craft4 or ask your own question.