I have a craft CMS 2 codebase that a former developer had made for running on our PHP 5 server. Recently, the server upgraded its PHP version to 7.3 so I am trying to migrate the website to a later version of CMS 2 or CMS 3 that will operate on PHP 7.3. I am not sure what version of Craft was used to develop the website. Any advice on how to figure that out is appreciated. The website was made in 2014 and this is the project structure. 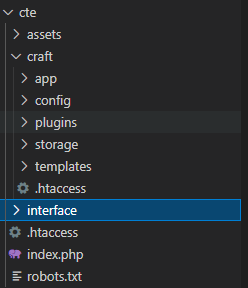 The server encountered an internal error and was unable to complete your request. Either the server is overloaded or there was an error in a CGI script.

If you think this is a server error, please contact the webmaster.

Object not found! The requested URL was not found on this server. If you entered the URL manually please check your spelling and try again.

If you think this is a server error, please contact the webmaster.

Any advice appreciated or a link to pre-made database migration scripts. As of now, I am thinking it is possible to copy the content from the database file but that would involve a lot of manual work.

Craft 3 was a major rewrite of the entire platform, so it will definitely be a lot easier to upgrade to a later version of Craft 2. In fact, you're probably going to have to upgrade your Craft 2 install regardless of whether you want to move forward to Craft 3 eventually, since it's not possible to upgrade sites on very old Craft 2 versions to Craft 3. Assuming the site hasn't been updated since 2014, you're probably going to be on Craft 2.3-something, and the latest Craft 2 version (which is the one you should upgrade to) is 2.9.2.

Once you've got your Craft 2 install upgraded, it's worth noting that Craft 2 itself is quite outdated at this point, and will reach its final end-of-life in January 2022 (that means no support or security patches). If the site is relatively simple and doesn't have any bespoke plugins, it might be worth it to upgrade to Craft 3 after upgrading to the latest Craft 2 version.

Another thing to be aware of is that while Craft 2.9.2 itself will be PHP 7.3 (and 7.4) compatible, some of the plugins you might have installed might not be. So make sure to upgrade any and all plugins to their latest version as well. You'll find a link at the bottom of the control panel to the Updates section inside Craft; that should list any available upgraded versions for your installed plugins. Craft 3 makes this process a bit easier by enabling you to upgrade plugins via the control panel, but for Craft 2 this will be a manual process.

How can I migrate the database or content? I have seen example of migrations from Craft 2.6 to Craft 3 but I don't think that applies because this is an early version of Craft 2.

Craft will migrate your content automatically for you, when you upgrade (even when moving from Craft 2 to 3). You shouldn't need to do anything manual here, unless you've got some bespoke plugins that interface with the database at all.

The errors you're getting sound like server configuration errors though, probably not PHP compatibility issues. It also sounds like you're using Apache, so your issue is probably going to be in your .htaccess file. A quick thing to try is if you have a file called htaccess (without the dot) in your public folder. If that's the case, rename it to .htaccess (with a dot). Beyond that, check out https://craftcms.com/docs/2.x/installing.html for pointers on how to get Craft 2 to run.

Not the answer you're looking for? Browse other questions tagged database error craft2 migration or ask your own question.

11
Migrating a whole website between Craft instances
1
Transitioning local Craft site to AWS EC2
4
"Craft CMS does not support backtracking to this version. Please upload Craft CMS 0 or later."
1
Should project config be used during development when migrating from Craft 2?
1
bootstrap.php returns a value of 1 in Craft CMS
1
Error trying to run Migrate from terminal on Craft 3.4