I have a site with a custom module that was working fine until just recently but I tried to do a plugin update via CLI and it returned Failed to instantiate component or class "modules\exifreturn\ExifReturn", even though the update did actually complete. But after that, the front and backend of the site were displaying the same error.

I've seen a similar question already about this but the suggested fix in that question isn't working for me. I've also seen some discussion in Discord and have been looking at how NY Studio set up their Devmode repo and as far as I can tell, I've got things set up the same, so not sure why it's not working.

In config/app.php I have:

In composer.json I have:

and on the server I have this in the modules folder: 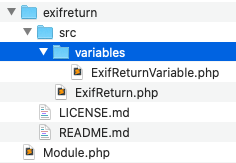 Make sure you have the correct namespace in your modules/exifreturn/src/ExifReturn.php class. From what you show, you should have:

Right at the top, after <?php. With that in place, run composer dumpautoload.

Not the answer you're looking for? Browse other questions tagged modules or ask your own question.

2
"Failed to instantiate component or class" when calling Craft module

1
"Template Not Found" error when trying to access a module controller action
2
Getting a 'ReflectionException' error, "Class modules\Module does not exist' when I change the namespace of my module in Craft 3
2
Custom module that can define and have settings referenced (Craft 3)
2
"Failed to instantiate component or class" when calling Craft module
1
Trouble calling service methods from primary module class
1
Trouble finding the correct path to template in custom module and getting the "Unable to find the template" error
1
Class '...SiteModuleService' not found when used inside scout.php