What could the possible causes be for a mismatch between `craft_fields` and `craft_fieldlayoutfields` MySQL tables?

I'm debugging an Internal Server Error on a site developed by, well, not me. :p The site has an absolutely enormous Matrix field called "Modules", and the blocks in said field have so many fields that it reaches some sort of "65,536 char row limit" in the database when trying to add new fields.

Anyway, so the most recent block added to this giant Matrix field causes an internal server error whenever it gets added to an entry. The relevant web.log line is:

So this led me to poking around the database, trying to figure out why parts of Craft thought this field existed, but it wasn't being shown in the backend.

What I found was that the Matrix block in question, which has a tabId of 3275 as referenced in the craft_fieldlayoutfields table, has only 4 rows in that table (one for each field seen in the backend): 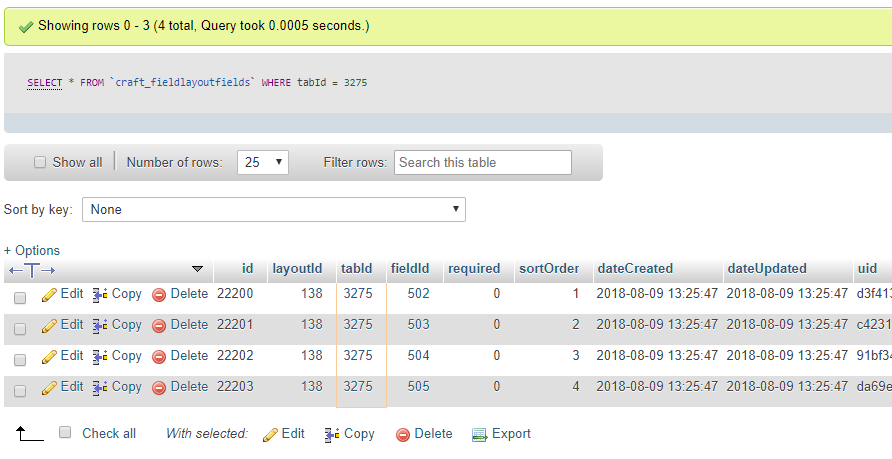 However, when I looked up those field IDs in craft_fields, I saw that they had a common context column, of matrixBlockType:78. Querying that table for all rows with that same context, I found the mystery fields: 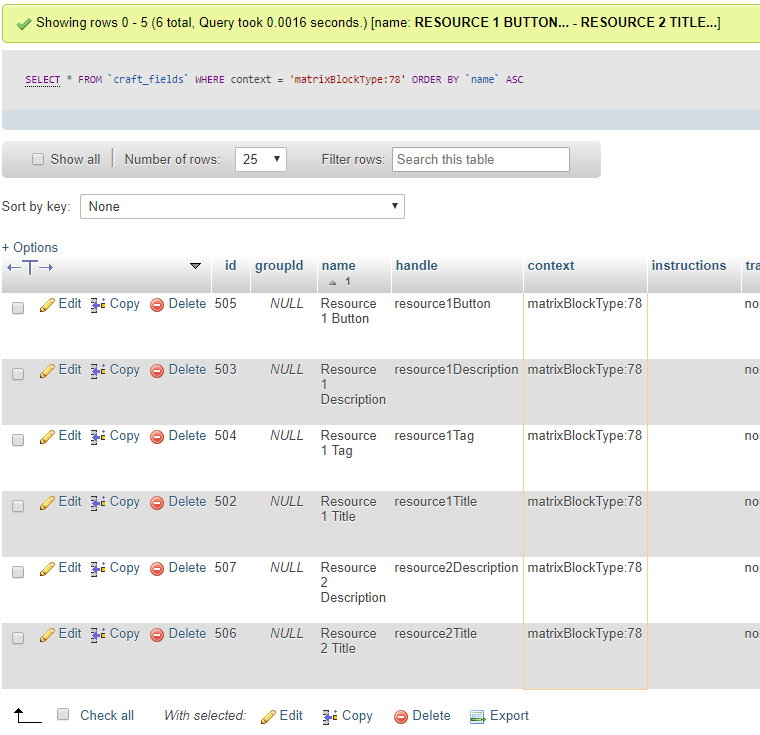 So at this point I have two theories about what happened:

So the actual question is this: Which of those two scenarios (or some other cause I've not thought of) are more likely to result in mismatching database tables?

Craft doesn’t do any field operations in the queue, so it must be the first option.

Create a DB backup first, but it should be safe to delete the rows for fields that are not in the Matrix field’s layout. It also wouldn’t hurt to double-check the matrixcontent_modules table to make sure it doesn’t have columns for those fields.

Also worth noting, you can shrink the size of the table by going over all the sub-fields and checking their Column Type settings (under Advanced). If it’s possible to select smaller column types, you should do it.

Not the answer you're looking for? Browse other questions tagged matrix field error-message mysql or ask your own question.

2
How to process CSV files within a Matrix field?
1
Related entries from a dynamic dropdown
18
Solution for Matrix-within-Matrix (or More Robust Table Fields)
2
Where are Matrix Entries Fields Relationships in the Database?
0
How do I set all Assets fields in entry to same directory?
0
<form><matrixBlock><checkbox></matrixBlock></form> How do I store multiple form entries in 1 table field?
1
Import body field into a matrix text block
1
Database: Syncing "craft_fields" table through SQL dumps not possible?
1
Matrix Error - "Field Limit is too big for your chosen Column Type"
1
Why does the matrix field produce such a massive amount of duplicate information?