Extra margin in Default System on subpages like news

On the default install, taking out all css. There is an extra margin space at the top of Chrome, and IE Edge but firefox is fine. I also checked out the error 404 page, and it too is fine like the standard layout page at home.

However, if I click news or create a new extends sub folder, they will have an extra 26 pixels at the top.

I noticed this trying to have a top bar flushed to the very top. I rolled back everything to stock and used the default template, took out all CSS from it, and still notice this issue.

here is an image comparison of the two pages, no css using Chrome. 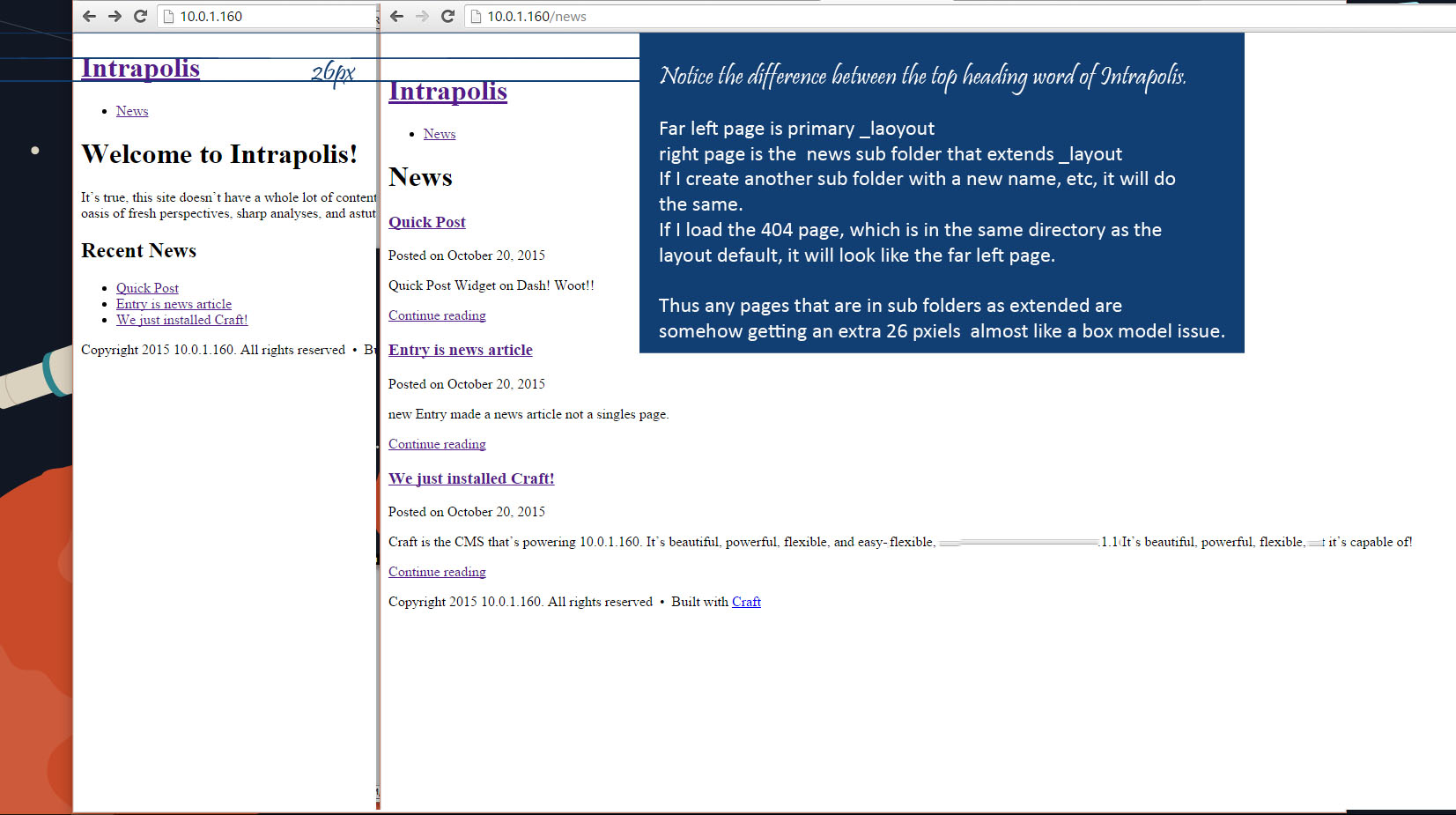 Unlike some other CMS systems, Craft doesn't specify what your front-end templates should look like in any way (you could output your content as .txt files if you wanted to). It also doesn't add anything to your rendered page output that you didn't specify (with the exception of error info if 'devMode' is set to true). The default templates are really just there as placeholders so that you can confirm the system is working properly.

I can't say specifically what is causing your rendering/margin issue, but I would just ignore it and start with your own clean templates. All of the browsers that you mention also have some form of web inspector/development tools. If you really want to know you can 'inspect element' with the browser tools and see what css if any is causing the problem.

Resolved by nuke and reinstall.

Thanks for the answers. It was in my own templates that I noticed the issue to start with. I removed all CSS to make sure it was not the cause in some odd way. I wanted to use the default template to be sure I had stock html from the system to also cut out any possible html code issues I might have mistakenly added or modified. None of my solutions worked, so I opened a ticket with Support. Brad did verify that he was able to install from scratch, remove the css, and verified it in Chrome.

I saved my templates that I personally created, as well the foundation.zurb components that I introduced. I deleted craft and the db, and started it over from scratch. Once I had it back on fresh, I removed the CSS again from the stock template and the space issue was gone.

I re-implementable my template and foundation.zurb components again, and everything was fine this time. All of my own additions were okay as well. Something somewhere crept in on my first install somehow I guess. Glad that it's resolved now.

It was odd though because I did refer back to a stock template saved from the default unzip as well as removing all CSS. I did have some posts that I added to the news feed back though so I am wondering if perhaps it crept in that way. Maybe something I did on one of the posts, because it was only ever on the news feed page that this issue appeared.

Not the answer you're looking for? Browse other questions tagged templating css or ask your own question.

5
Is there a tag to get the parents url like {{entry.url}}?
1
Check if a Relationship field has a relationship without extra query
10
System Status Off Custom Text
5
System Status flag in template context
7
How do I get the Settings System email Address?
2
Why is news/_entry not extending _layout?
2
How to set title in layout template from content template
1
Keeping order of blocks like in backend
1
Access Default User Photo
1
How to get an element query into json (for vue) without extra data?